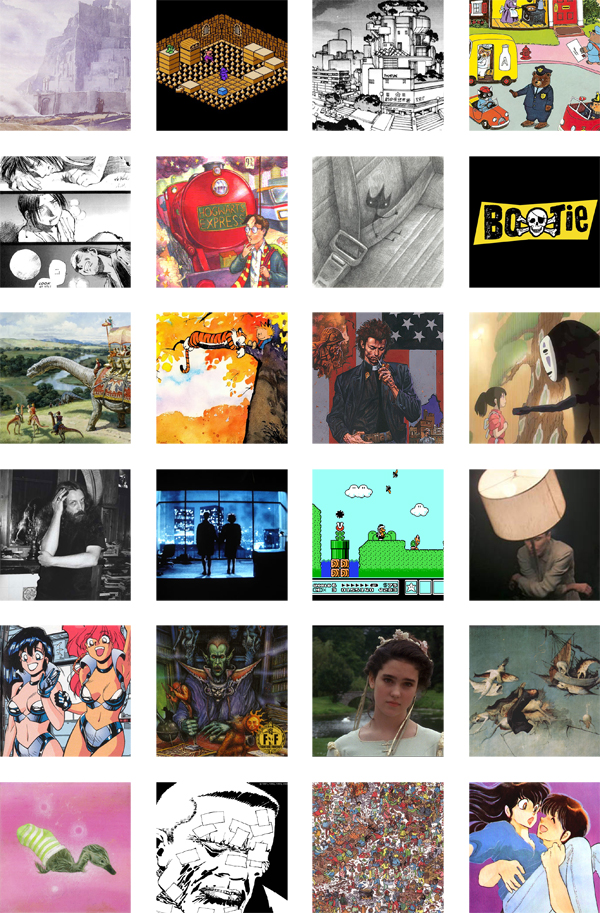 These three are all pretty tied up with one another in my mind. I read The Hobbit in primary school and was keen on it, but it was Lord of the Rings that really captured my imagination. At the time, my Aunty lived a few hours south of us which was then a small beach side town populated mostly by hippies and alternative lifestylers (not so anymore). She had no television, weird incense, a hand made mud brick house, a pit bull, a pet pig and kangaroo and all manner of oddities. She also had, a glorious hard cover edition of Lord of the Rings.

This book was physically huge to me, with tiny text, indecipherable descriptions and glorious illustrations. Although we would stay at her house numerous times a year, I never managed to read it all, I probably barely made a dent in it. But that in itself was probably what drew me to it.

The fact that it was so massive, that someone could create such a vast fictional world, populated with creatures and races and cultures and histories and architecture and economy. A world that, try as a might, I could not understand.

Alan Lees illustrations which appear throughout the book gave tantalising glimpses of its scope and were rendered with such calm compositions and a subdued palette that it gave the whole text a weight and seriousness I had not experienced in fantasy texts.

A later was given a Tolkien Bestiary, which just amplified my interest and bewilderment at the level of detail Tolkien had gone in to when creating Middle Earth.

For my 18th birthday, my Aunty gave me her copy of Lord of the Rings that I had admired for all those years.

Solstice: The Quest for the Staff of Demnos

This was a strange little game for the NES that I played a lot when I was younger. I never finished it, as It was devilishly hard. It is important however because it marks the first time I had been exposed to isometric perspective, or at least the first time I was really aware of it.

The strange geometry, segmented tiles of land and rooms and optical affects struck with me. This influence can mostly be seen in my painting practice where I often use isometric perspective to illustrate landscapes.

You can hear the awesome opening song here.

I was first exposed to Masamune Shirows work through the film adaptation of Ghost in the Shell (I expect this was the same for a lot of “westerners”). I quickly tracked down the collected comic of the same name and was blown away with his dynamic action scenes, architectural forms, mechanical designs and complex sprawling plots. This extends through Orion which I also was a big fan of, Dominion Tank Police and to a lesser extent Black Magic.

His illustrations can be a little porny, which I always thought felt out of place within the larger context of his work. I guess he’s just cramming in everything that interests him all at once, it’s a bit of a shame though.

A favorite of mine from a very young age. Scarry’s ability to put in just the right amount of detail in to his world is remarkable. Cars, boats, planes, machines all feel simplified yet complex, cartoony and yet revealing in their functionality.

His world building was also a joy, Busy Town felt busy, felt real, with jobs and factories and shops and people. Like it was fully functional, and at the same time, completely bonkers.

Blade of the Immortal
This series really opened my eyes to how differently action could be paced in comics. Hiroaki Samura really slows things down to build tension, focuses on small details in the background to create a sense of place and intimacy. His illustrations go from course, frantic and inky, to gentle, soft and penciled.

The story isn’t anything remarkable, but the the story telling is.

JK herself is also an inspiration as a creative practitioner, single mother, clinical depression, etching out time to practice her craft. The struggles of living and dreaming coming good. Making the immaterial material.

I think the main thing is finding an audience, to have what you do be appreciated, and loved. There can be no greater reward for someone who is creating something. (Oh, the billionaire bank account is probably a perk also)

Shaun Tan is an incredible picture book creator, making works that defy expectations, each time pushing out of from his previous works, never looking back.

He can’t be pigeon holed in to this or that, each work stands on its own both in terms of visual content and literary.

Shaun is from Perth, and although he no longer lives here, he also doesn’t trash it. He seems proud to be from this small coastal city, one which is so often put down, shunned and ridiculed.

For that he is especially special.

Mash up music, especially the works of the Kleptones changed my perspective on popular culture and our relationship with it forever. Where the borders of ownership, culture and personal memories blur and mix and create something greater than the sum of their individual parts is where mash ups thrive.

Mashing is where idea are formed.

Dinotopia
I have spoken about James Gurney and his Dinotopia works before on this blog, and here he comes up again.

This was another book that I never actually owned myself, but was ever present around me while growing up. The schematics, cut aways, maps, diagrams and journals within the book changed the way I looked at fictional worlds. Through using “real” documentation, these fictional worlds come alive.

Gurney’s illustrations are breathtaking, and his success throughout the world is testament to this. From Dinotopia to National Geographic, he breaths life in to lost worlds and worlds that never was.

Calvin and Hobbes is a defining text from my childhood. Watterson’s seminal work has been discussed at length, and I don’t think I can add much more of worth.

His pacing, storytelling, characiture, environments, sentiment, action scenes are all in a league of their own. From simple gag strips, to philosophical dialogues, the series covers a huge breadth of human experience and hits it dead on each time.

This is a series that screams at you “more is more”.

Spirited Away begins with a calmness, a series of mundane experiences which accelerate in to madness with such precision that you barely realise what has just happened. It is all performed with a grace and beauty which many fantasy texts lack.

You care so much about the characters so quickly, you are flung in to the adventure so whole heartedly that you don’t question why she has to hold her breath over the bridge, you just know that she does. You know it with every fibre of your being.

Fun and gentle and touching and exciting with a genuine feeling of homesickness and sadness that is regularly overlooked in stories like this.

Alan Moore is a master of the comic. He knows how the medium works and uses it expertly. Every one of his texts is a lesson in what it means to make comics.

Enough can not be said or written about his influence on every comic creator making work.

This film, along with mashup culture changed my perspective on our relationship with consumption, popular culture and government.
It’s also fun and beautifully shot.

Nintendo in general absorbed a lot of my younger years. The mario brothers franchise in particular, but also the Zelda series. I can’t hear the coin collection sound without experiencing an endorphin dump.

The fun and surreal character design of the early games, along with their pixeled abstraction have stuck around and are paid tribute to in my series of Corazon works.

I first saw this film a long time ago and became instantly obsessed with it, watching it two, three times a day for about a month. The music alone is fantastic, but the theatrics of the concert are magic.

The kind of genius that is born and bred in art schools, of low budget, high impact uses of technology and found materials that can’t be faked. I love the way it starts so unassumingly and with such humor and builds to a huge gospel event, with everything in between.

The greatest concert ever caught on film? I don’t doubt it.

This man is all schlock, all cheese cake and mindless action and inane pop culture references and I lapped it up. He has a visual flair and energy to his work that is hard to match.

These books took up most of the time I wasn’t in front of the Nintendo. Steve Jackson’s and Ian Livingstone’s series of fighting fantasy books were pulpy and compelling. I would buy them second hand from the gaming store in town and quickly plough through them.

I never used the dice to fight and would often cheat by going back after making a mistake. All of this devilshness however, and I finished precious few of the books, I guess they were just really hard, or I wasn’t particularly good at them, or cheating.

The illustrations featured great (and not so great) black and white line work from a wide range of fantasy artists. These treats were sprinkled throughout the book at key moments. I often dream of putting together a large coffee table fighting fantasy book where each page was illustrated. I think it’d be amazing. (and super labor intensive and ridiculous)

I recently found out that they’re releasing the old books on ipad/iphone, which is pretty cool.

The first memory I have of finding someone sexually attractive is Jennifer Connelly in Labyrinth. This might be creepy, but at the time I was probably 9 or something, so I think it’s ok. Needless to say it left a huge impression on me.

Titillation aside, (which I don’t think is something Henson was going for) Labyrinth has some of greatest puppetry I’ve ever seen, great set design, costuming and characters. David Bowie’s cod piece is also a bonus.

Hieronymus depicts dreams and horrors beyond imagining. His subdued palette and perspective is technically amazing, as are his facial expressions on individuals. Most known for the Garden of Earthly Delights his work covers a broad range of Christian subjects all fitting perfectly in to his strange vision.

His creature design is both humorous and terrifying at the same time, strange birds ice skating, thorny shadows drawing across bedrooms. A mind most impressive.

My partner in art and life, Elizabeth Marruffo has had a huge influence on my work. Her use of space on canvas, the barely there rendering of subjects and landscapes and the quietness of her work have all found their way in to my own practice.

She is patient where I am rushing, gentle where I am coarse. She balances and teaches me more every day. The single greatest influence on my work and life.

I love Frank’s use of negative space and his bold compositions. His stories are simple and pulpy and full of energy.

I spent hours reading these books in the car. Martin Handford’s illustrations are filled with so many great details, so painstakingly rendered that they are, to this day, a wonder to me.

Maison Ikkoku was the first romance comic I had ever read, in fact, probably the first comic that didn’t revolve around people punching each other. It showed me that comics could, really, be about anything. That lycra and swords and explosions weren’t mandatory when creating comic work.